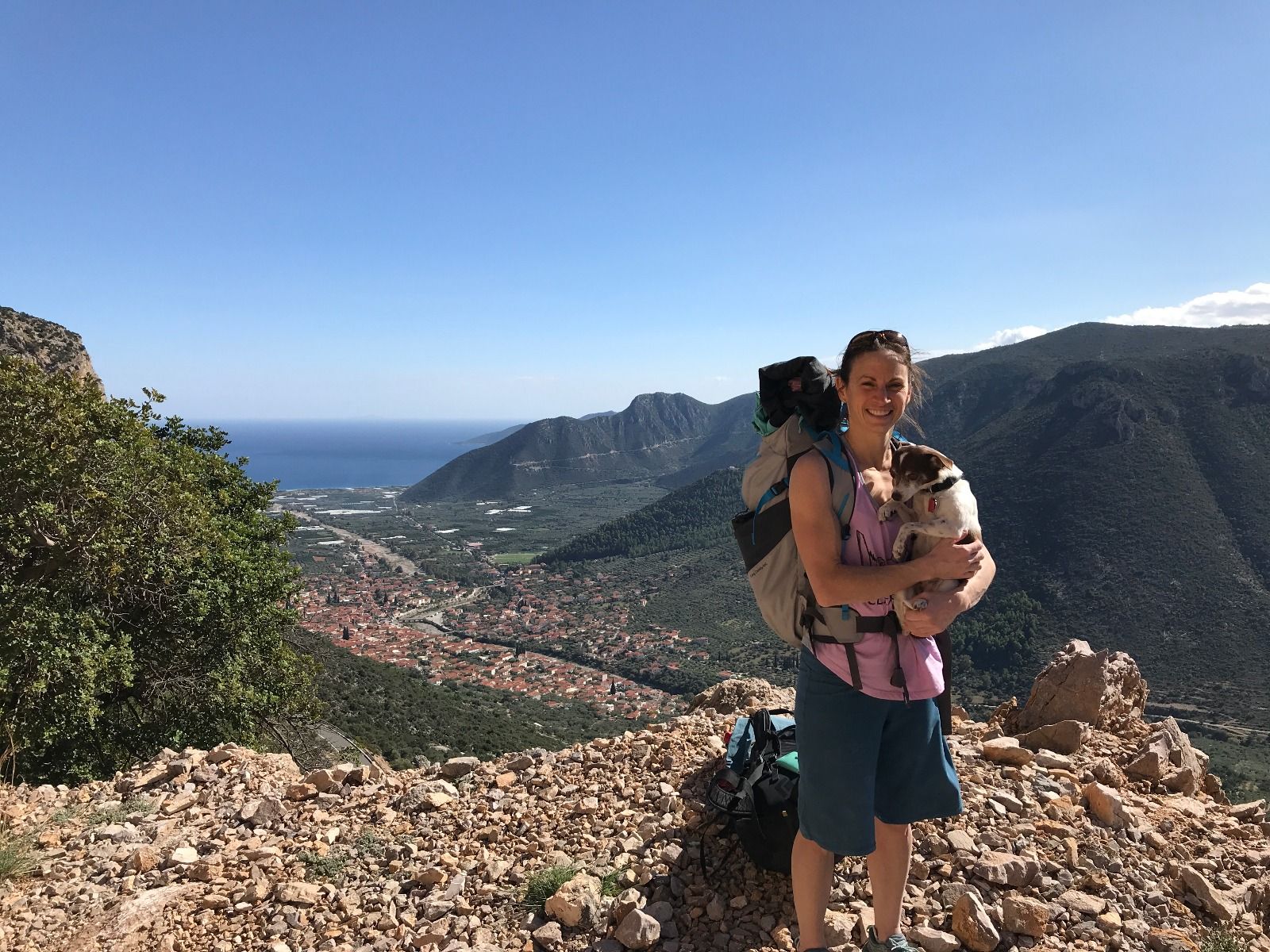 When I describe my trip to Leonidio, I always say the climbing was quite good, maybe not my favorite in Europe, but still loads of fun. The Leonidio lifestyle though? I loved it. From the start, Leonidio was rejuvenating. After 12 hours of air travel and a 4 hour drive, we arrived in Poulithra a little town 3 miles down the coast from Leonidio. When I stepped out of the car, I was greeted by the heavenly smell of jasmine and the delightful feeling of warm air on my skin, despite it already being well past sunset. The next morning, we awoke to a beautiful sunrise over the mediterranean. Needless to say, I was psyched. Things only improved when we went climbing. 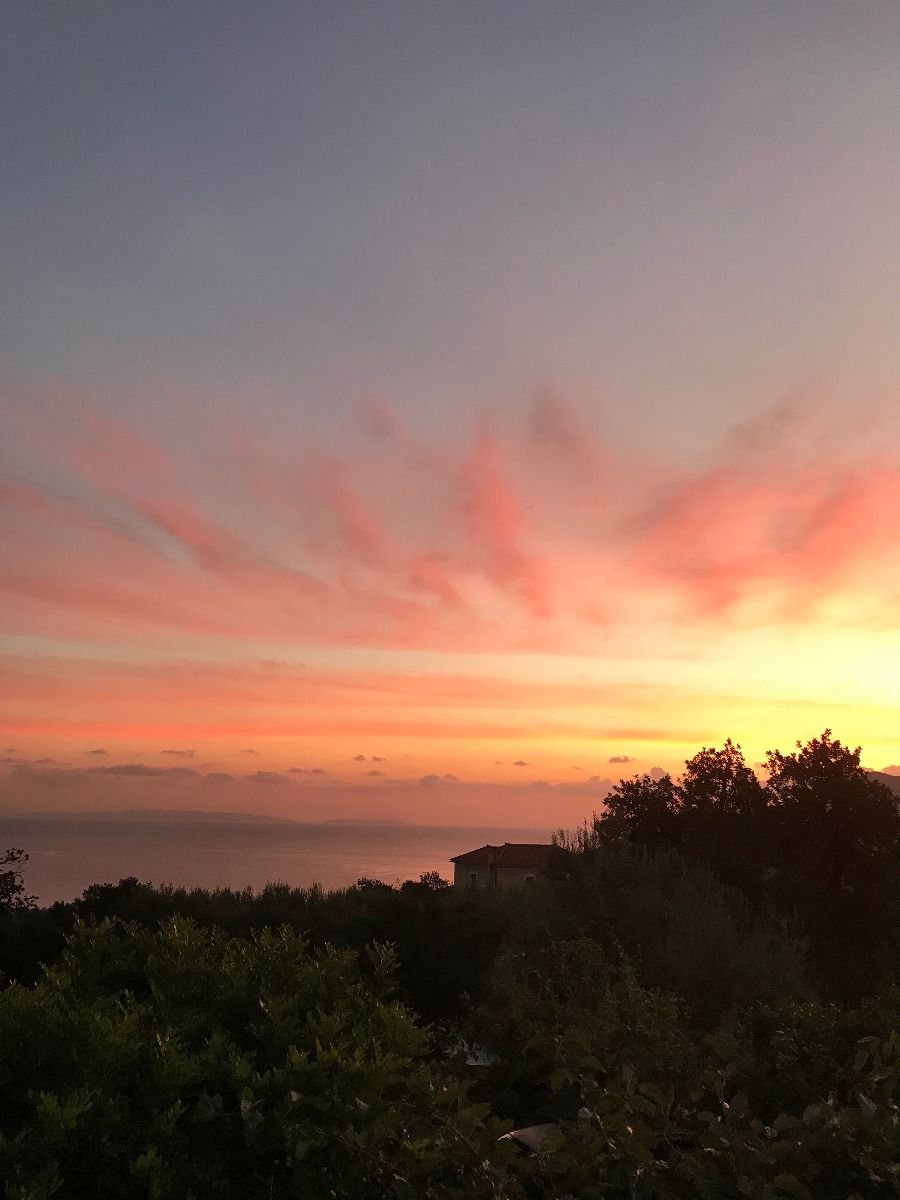 The climbing in Leonidio is split among a huge number of small to medium sized crags with anywhere from 3-50 routes per cliff. There are slabby and vertical walls as well as steep caves with tufas galore. 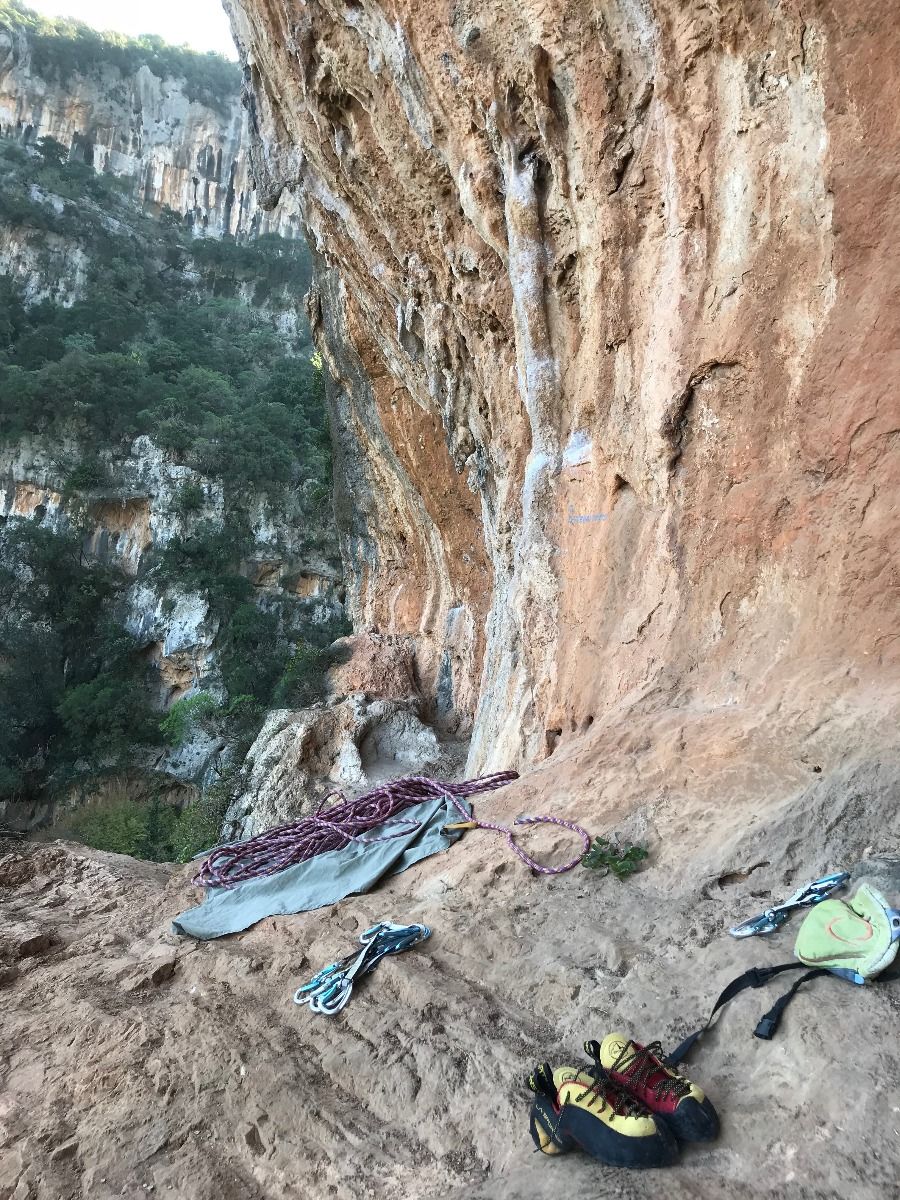 There is something for everyone as grades run the gamut from 5.7 - 5.14. It’s possible to climb in Leonidio much of the year (months to avoid are Dec/Jan because of rain and Jun-Aug because of heat). Which crags you end up at though will be dictated somewhat by the weather. There are some walls that soak up the sun all day and others that are at higher elevation and during the winter never see any sun. It’s probably possible to find or order a guidebook for delivery in the US, but guidebooks are sold at probably half the stores in Leonidio, so if you can be patient, it’s easy enough to pick one up on arrival. I would recommend bringing a 70m rope and even an 80m if you can swing it. An 80m is not required, but if you want to try any of the longer extensions, it would be helpful. It’s definitely possible to get by with a 70. My rope of choice for this trip was an 80m bipattern Beal Booster. The bipattern is a particulary nice feature when dealing with such a long rope. Additionally, when carrying 80 meters of rope around, the reduced weight with a skinnier cord (9.7mm in this case) also makes life a bit easier. The Booster held up great even with the sometimes abrasive surfaces we encountered going over and around tufas. The number of draws you will want depends on if you want to leave any up for multiple attempts. If you’re always cleaning routes immediately and don’t need extra for warming up, 25 should suffice.

Center Road in Leondio with red rocks in tha background 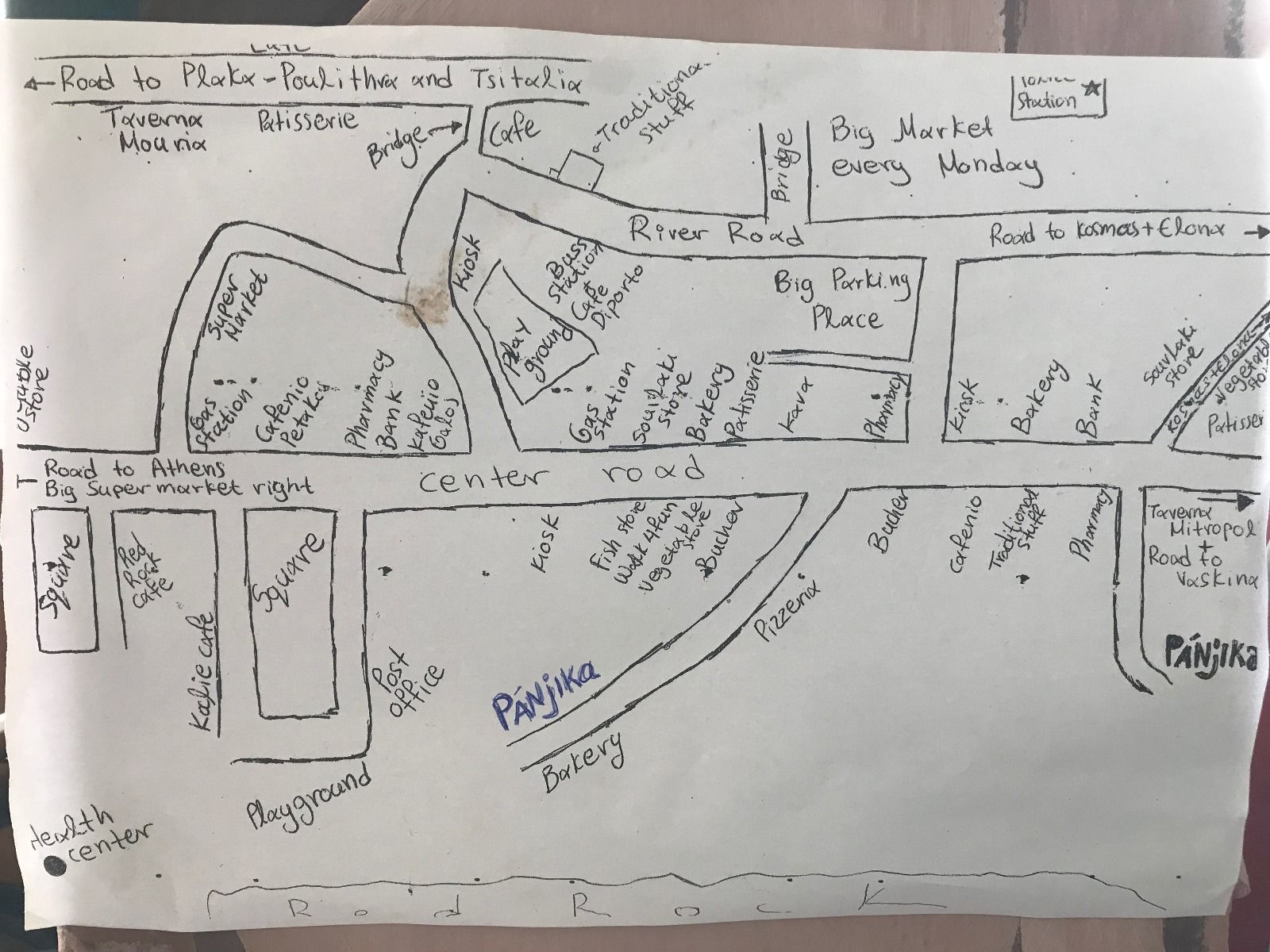 Leonidio is a pretty small town, but it has everything you need on a climbing vacation from groceries to climbing gear and of course tons of treats like Baklava and chocolate. Although if you are one of those climbers who likes to tape on their knee pads (like for me for example), definitely pack enough duct tape for the duration. Center Road in Leonidio with Red rocks in the background. Map of downtown Leonidio For eating dinner out, I highly recommend Myrtoon in Poulithra. I don’t know that it’s the best restaurant in the area, only because we never tried any others, but friends told us not to bother. I never felt the need to branch out, if you enjoy fish, they cook it to perfection. I didn’t try any of the meat dishes, but friends report that they are prepared equally well. They also have multiple delicious vegetarian appetizers and entrees. It’s not difficult to find accommodations in Leonidio. Airbnb is full of apartments with a wide range of prices and features. We stayed in a wonderful 1 bedroom apartment complete with a balcony with breathtaking views of the mediterranean where we enjoyed our morning coffee and breakfast.

Our first morning after arriving, our host provided us with fresh oranges from their garden and we never had to buy an orange or mandarin our entire trip. The people of Leonidio were extremely generous with us, and the list of gifts we were given from new acquaintances probably numbered in the twenties by the time we departed.  There are parts of Greece that are blue zones. Blue zones, a term first used by Dan Buettner in National Geographic, are areas with a high density of people that live much longer than average. After my month in Leonidio, I’m not surprised there are locations in Greece with this distinction. I don’t know if it’s the calming effect of the Mediterranean, the comfortable climate or something else indefinable, but the relaxed, friendly and happy manner of the locals was notable. 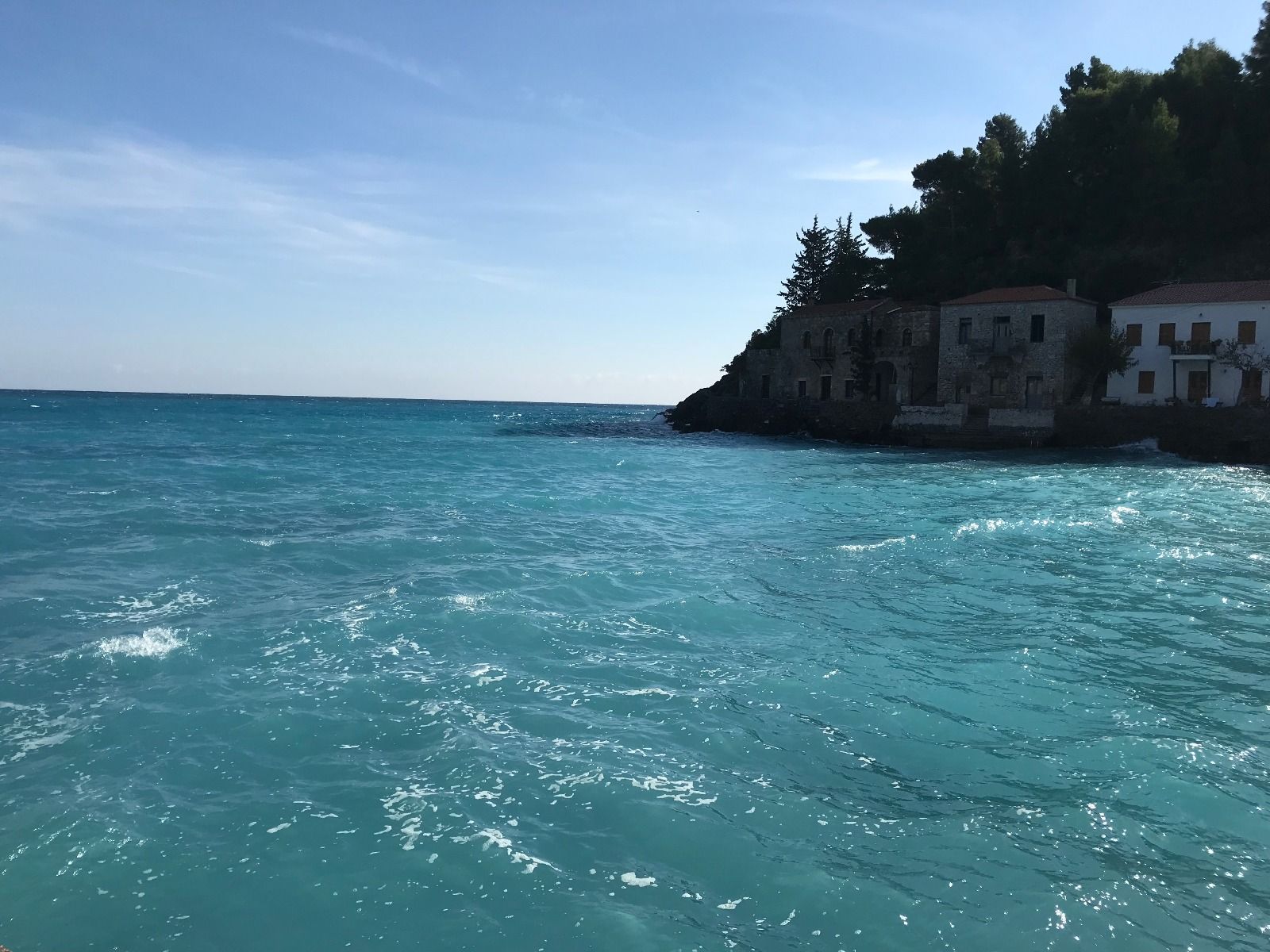 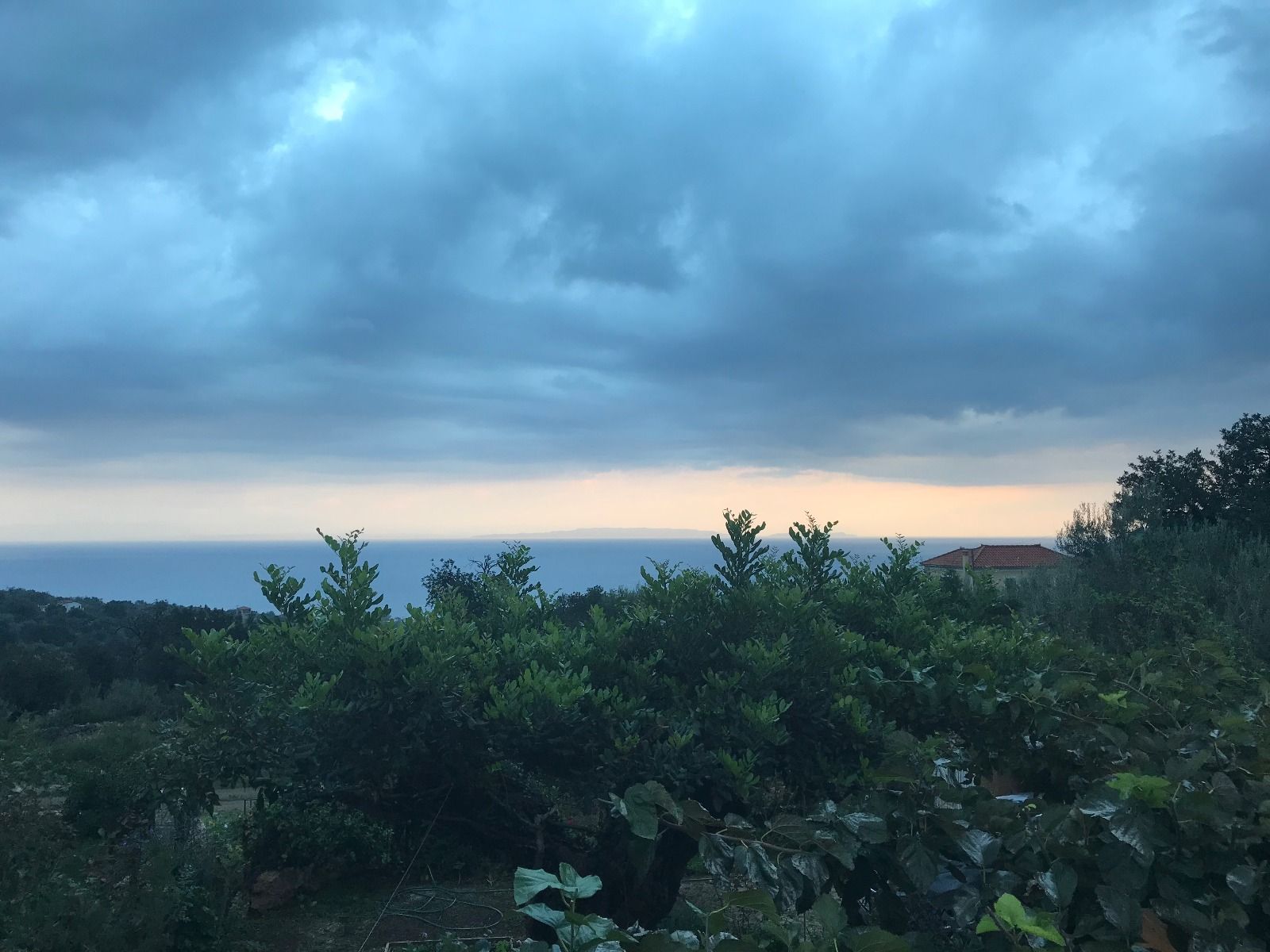 Whether a dabbler or a dedicated sport climbing junky, I would highly recommend a climbing vacation in Leonidio to anyone, perhaps it will even help you live a little longer. As a side note (as people often ask), I haven’t been to Kalymnos, so can’t compare the two locations, but Leonidio is easier logistically. After arriving to Athens, all you need to worry about is a car rental and a 4 hour drive. Going to Kalymnos however, will entail additional travel, either via ferry, plane, or possibly both. Additionally, if the weather is bad it may not even be possible to make the journey between Athens and Kalymnos. This can make trips returning home stressful, unless extra days are used for padding to ensure international flights aren’t missed.